skip to main | skip to sidebar

Between Iraq and a hard place 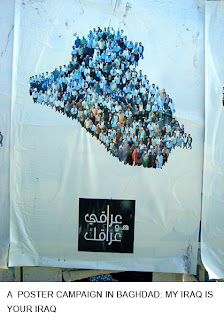 Almost two months now since I arrived in Baghdad. As a guest in this land, I was looking forward to meet Iraqis and talk to them. To hear their side of the story, if they had any. Instead, I found myself mixing with expats from all over and a number of returning Iraqis. Each of them having found himself here for an ideal, a profit or a mix of both. However, being interned in Alicatraz puts all of us in quarantine from the rest of Iraq, a kind of bubble distorting our vision of the city: here I was in the heart of Baghdad, yet I was still getting the story about Iraq from...TV (sigh).

When we first arrived in the compound, we were issued our uniform (not a striped one: just the protective gear for "our" own safety). We also had to wear our tags in order to walk within the walls of Alicatraz: at least they were not tattooed on our arm, but talk about a Yellow Star revisited. Last but not least, we were kindly asked not to "mix" with the local guards, because "they" are here only for our protection, "they" should not know any details about us, because "they" might pass the information to someone who might want to harm us. Nevertheless, I looked at the guards and the few Iraqi colleagues coming from outside as my only potential insight for a snapshot of daily life in Baghdad. As true Middle-Easterns, their hospitality had no limits, and behind the sad veiled look in their eyes, you could sense this "rage de vivre", despite all the hardships of liberation. Bonds started growing from a simple smile, to a gentle "Sabah el kheir" (good morning in Arabic), to a vigourous handshake and from there, quickly to sharing food, jokes and stories: those precious stories.

The daily lives of Iraqis started slowly unravelling. Not one of them was spared the horror of the daily bloodshed. Not one of them did not lose a loved one either forever, or to the safe haven of a peaceful country. Still, behind that deep, penetrating look, one could sense that they were ready to live and forgive, put the past behind, for the sake of winning their lives back. Many still thought they were living a nightmare out of which they will hopefully wake up any minute and resume a normal life.

Having gone through a somehow similar situation in Beirut during the war, I felt I could relate more to their stories. A conversation will typically end with the innocently thrown following question: "So what do you think? Was it better under Saddam, or is it better now?". I am sure most of us -foreigners- at some point have thrown this question like a dagger tickeling an unhealed wound. Let the first of us who did not ask it hit me with the first stone (-says Jesus). Those of us who opposed the American "occupation" of Iraq, do it for self-satisfaction. For the sake of telling themselves "I knew that!"; while those who supported the "liberation" of Iraq want to hear someone telling them "My life is better now" just for the sake of free self-gratification.

Did any of us ever think what the limited choice of answers meant to the person answering it? We are basically asking them to say if they prefer being brutalised by a dictator, or blown-up by terrorists. We instantly make them aware that freedom is nowhere to be seen in the equation. That they can either have security, but permanent fear of being jailed, or have no security and no freedom. That they can only choose between worst and worse. That they are stuck between Iraq and a hard place. Then off we go with our lives, and here they stay with no way out.
Posted by Sergitos at 9:04 PM 2 comments:

A blast from the past! 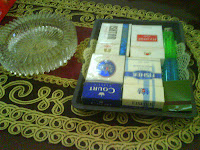 Today, I was taken a quarter century back just by looking at the coffee table in one of the numerous Iraqi ministries I have been visiting in the last few weeks. I had flash-backs of my mother asking me suddenly to go to the grocer and buy a pack of Winston because "Emm Tony is coming and we run out of her brand of cigarettes". (Yes! A 10 year old can buy cigarettes in Lebanon...talk about freedom!). Back then, the cigarette tray was part of the furniture, along with half a dozen ashtrays. I have noticed lately it disappeared from Lebanese living rooms. It is now politically (or should I say socially) incorrect to offer "poison" to our visitors (don't take it as a complaint) Am I opening the door to a round of arguments and counter-arguments between smokers and non-smokers, pro-smoking and anti-(nazi as R would say)smokers? I know am happy to go drinking and dancing in a smoke-free environment in one of the cities from the growing list of smoke-free places of the world. At least I don't smell like an ashtray after going back home. My own guilty pleasure? At some point I used to find sexy the flavour of a kiss with a smoker. We all know at least one smoker who argues that they smoke because they want to, not because they cannot stop: Discuss!
Posted by Sergitos at 5:47 PM 1 comment: