skip to main | skip to sidebar

"L'auberge rouge" is empty... I can't hear a sound and I don't see a silhouette walking back and forth while on the phone!!!

Seeing you for the last time in my room, resting in my bed was very hard...but I was so hopeful... Your eyes... those eyes that said ten thousand words... and that smile that was hiding so much pain... As usual, you were so strong... so considerate... you worried so much about the others but never about yourself... I told you to wait till my return but you had to go... You had to let go and you took that last flight to a beautiful unknown...

We were all over the place together... from Bangkok to LA... from Capetown to Vancouver... but never to Lebanon... YOUR Lebanon that I SO wanted to see through your eyes... that I promised to do it with you... The closest we got to it was through Fairouz's voice and Majida's lyrics (magical concert moments that I shared with you). I still can't listen to those CD's but I know that with every song I'll think of you and for every new one of our famous "translations" I'll have a smile for you...

Fairouz is screaming "Waynoun" and Majida is choking with " Bakkir Falleit"... and I'm roaming in an empty red place!!!

Serge is now in a better place

I have been a fan of Blog Trotter for the past months. I am very saddened by the news that Serge has passed away. I am sorry and deeply affected by it. I was just a reader, and always found witty and entertaining his thoughts.

Hope you find resignation and have faith Serge is now in a better place.

When you were 17 and I was 16 (a year before moving to Canada), we went to the Goethe Institute in Beirut to learn German. I can’t recall how many times we used to sing “Die Gedanken sind frei” on our way to school, a popular old German song celebrating the freedom of thoughts. This is the song, which I will always associate with you in my heart:

Firas, your voice echoes in my ears right now. Between my tears, I smile remembering how you once turned this meaningful lyric into a funny (but still very appropriate) version.

Free like a bird (as in the song), you lived your short life to its full extent, realizing so many great things in such little time! As you lived (fully, intensely), you passed away by flying in a rush to the after-life.

Brilliant, talented, loving, caring, courageous, crazy, and so handsome! You touched so many lives Firas. Not only you make us all proud, we are grateful because you made an amazing contribution to make our world a better place.

I am honoured to be your friend, Firas. Thank you for the wonderful memories in Montreal for several years. I love you so much. The last time you called me in Toronto, I told you so, adding to it “please don’t forget.” I hope you won’t.

I promise that I will always pray for (and be in touch with) your family. My heart goes to your parents and sister, to all your relatives, friends, and loved ones wherever they are, whoever they are.

Rest and fly in peace, my dear friend. 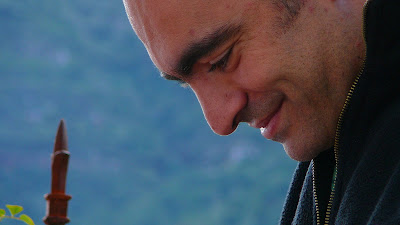 He hung up his trotting shoes… 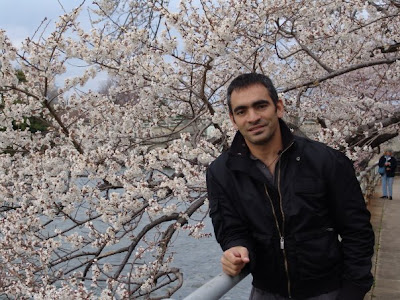 On September 28, 2007, at exactly 11.20 pm, the Globetrotter (aka Sergitos) decided to embark on his last journey. He was diagnosed with liver cancer during a two-week vacation in the States and Canada. His five-week stay in North America turned into one last struggle for survival. At the end of the day, he decided not to fight anymore. So he hung up his trotting shoes, walking barefoot towards his last destination.
Robert Chidiac
Montreal-Canada
Posted by Robert Chidiac at 11:20 PM No comments: 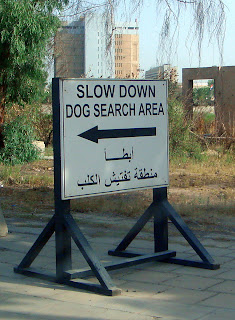 At this checkpoint, English speaking people, will expect to be sniffed by a dog looking for traces of explosives. However if you are an Arabic speaker, you will send your dog to be searched.

I finally managed to snap a pic of this sign that what obviously lost in translation. And this won't be the only translation problem one will have at this particular checkpoint. Spanish speakers will go through much faster as they will be able to communicate with the soldiers manning it: mostly Peruvian personnel who can barely say three words in Ingles...
Posted by Sergitos at 3:44 PM 2 comments:

Tell me what color you are... 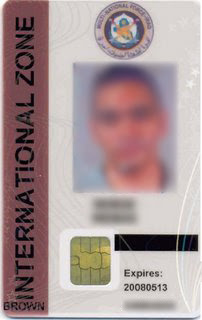 ...and I’ll tell you where you can go. This is neither pre-democracy South Africa, nor pre-civil rights USA. Welcome to post-Saddam Iraq. For those whose PC sensitivities are already raised, calm down: I am not discussing skin color, but badge color. In post-2003 Iraq, to be able to move around and have access to some areas, one needs a different array of ID’s giving their holder certain privileges. It was one of the first things I noticed when I landed in Baghdad: a pouch hanging from people’s neck, or in the case of the macho ones, wrapped around their biceps, with all types of ID’s in them. Most of these protective cases have an embroided Iraqi flag, with messages ranging from “US Embassy Baghdad”, to “Operation Iraqi Freedom”. It didn’t take too long for me to discover the meanings of the rainbow range of colors, and to find out the advantages and disadvantages of each one of them.

Baghdad's center of power today is based in the ex-Green Zone, now International Zone or IZ. Once a safe area in a city gone mad, it is today the target of multiple mortar attacks. Not to worry too much about it though: with a population density as low as the Antarctic, very few of the projectiles cause casualties. Many public servants working for the new Iraqi government are fortunate enough to live in the blessing of almost uninterrupted electricity, water and cleaner environment.

So who can go to the Green Zone? This where comes the famous badge, and the color one can get. Lets start with our hosts, the masters of the house: residents get obviously get a badge. One have to mention that many original residents were squeezed out with no compensation and very short notice. Families of newly elected MP's and government employees quickly replaced them. The best badge an Iraqi can get is the Blue stripe MNFI(Multi National Forces Iraq). It is strictly reserved for high level officials and MPs. Next in line, is the Brown MNFI. This one gives its holders the privilege to access the Saint of Saints, aka the Green Zone, without being searched, and can even escort people in. NATO and Coalition countries nationals get this badge automatically. However, other nationalities, including Iraqis, can only get it after a convincing justification from their job. Next in line is the Orange MNFI for Arab nationals and other developing world nationals. Those can access the IZ after being subjected to a search, and they don't have the escort privileges. I can also briefly mention the Yellow MNFI which is for private security personnel to escort "clients" to and out of the IZ

At the bottom of the color range, comes the Red stripe MNFI: this is issued to the common mortals, Iraqis who happen not to live in the IZ nor to have a high necessity to access it. What makes me feel the irony of the situation is that me, as a Canadian with a Brown badge, can escort an Iraqi to this area of HIS capital, when am a guest in HIS own country. Why are Iraqis so disenchanted with their newly found freedom? Go figure!

Above the rainbow colors, comes the golden standard, which I nicknamed the “Open Sesame” badge: “I have a DoD” would tell you their holders with a certain note of disdain in their voice. Department of Defense contractors, who are US citizens, get this ultimate magic key. For them, no Ministry is out of bounds. The Republican Palace which became the US Embassy, while the biggest US Embassy in the world is being built along the bank of the Tigris, is their favorite place of meeting. They even had a Starbucks open in one of the halls of the Palace. I wonder how Iraqis feel when they see G.I.’s hanging out in the middle of what was the symbol of the Republic, drinking lattes and listening to their IPod. I'm not even from here and I found it highly revolting and profoundly humiliating.

Freedom came to Iraq, we hear. Freedom of what Iraqis ask? The years to come will be revealing, and the controversy will carry on for generations to come.
Posted by Sergitos at 1:01 AM No comments: